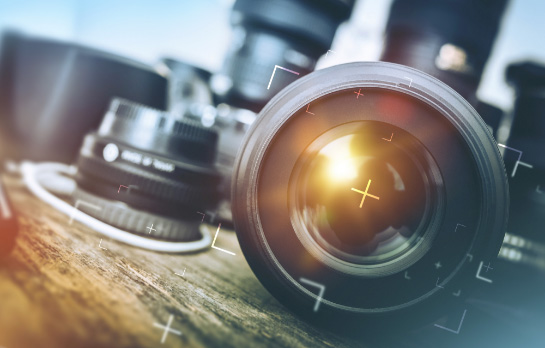 As one of the dominant mediums with outreach well-spreading across various gender, age and income levels, TV Commercial (TVC) is one of the primary communication tools KARMART undertakes to expand brand recognition locally and abroad. Thus far, the company has utilized both Free TV and Digital TV channels such as 33 HD, Thairath TV, New18, ONE, GMM, etc. 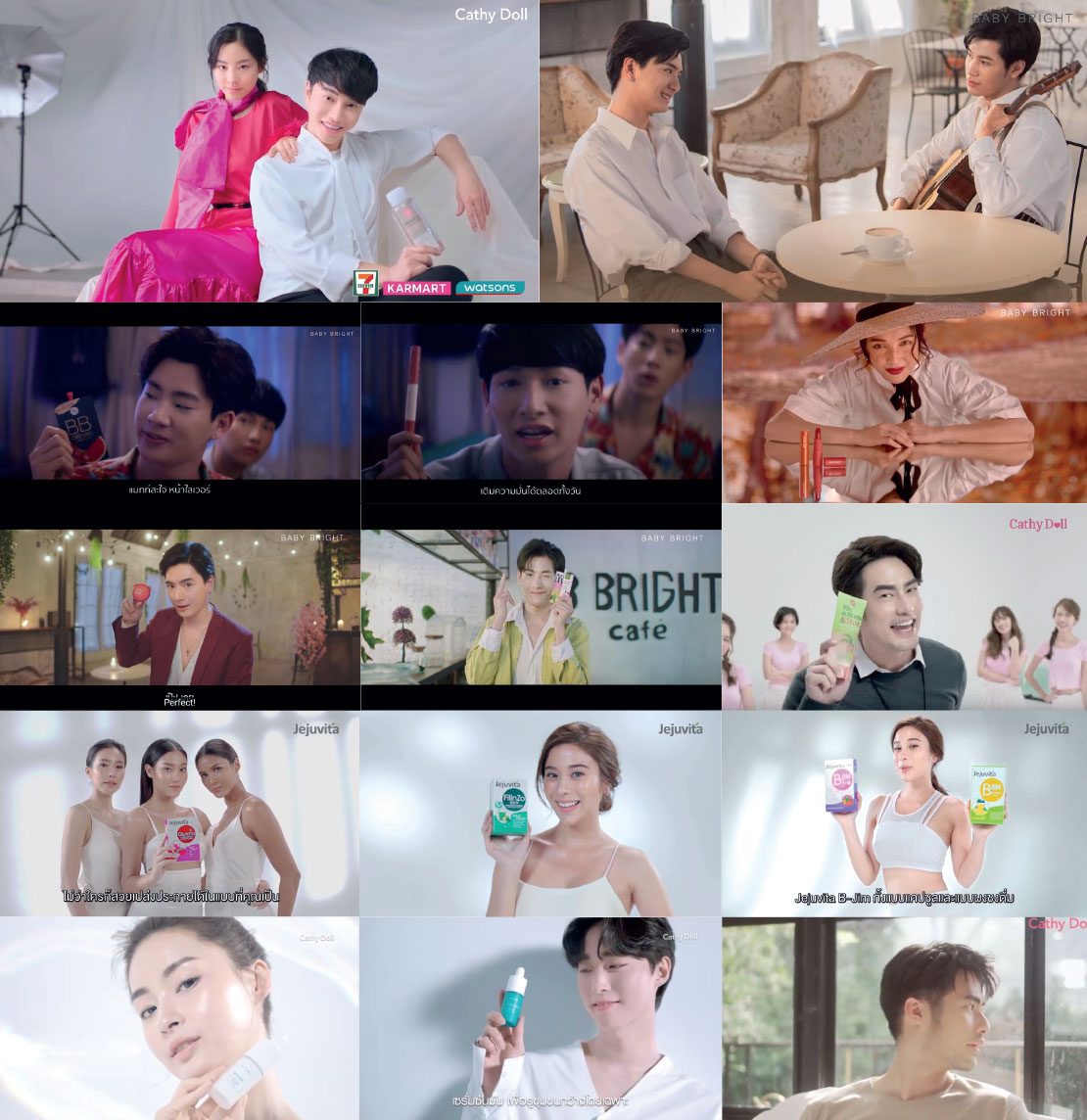 A form of well-recognized media, multimedia advertisement on BTS and MRT is another popular media KARMART has engaged because of its ability to reach target consumer groups swiftly in the city, including tourists. Tentatively, the Company uses the same ad contents on BTS and MRT as TVC to increase exposure and build brand awareness and recognition.

Maximum Urban People Informed or Mupi is a small-scale advertising media which can beffectively build brand recognition and is available all around Bangkok and other big cities. This media offers coverage across all residential communities and commercial areas.

Billboards are big outdoor advertising media that could attract attention from afar and is an effective tool in building brand recognition. This media is commonly available along main streets and most of the popular locations locally e.g. main road intersections, big markets or crowded areas in Bangkok. 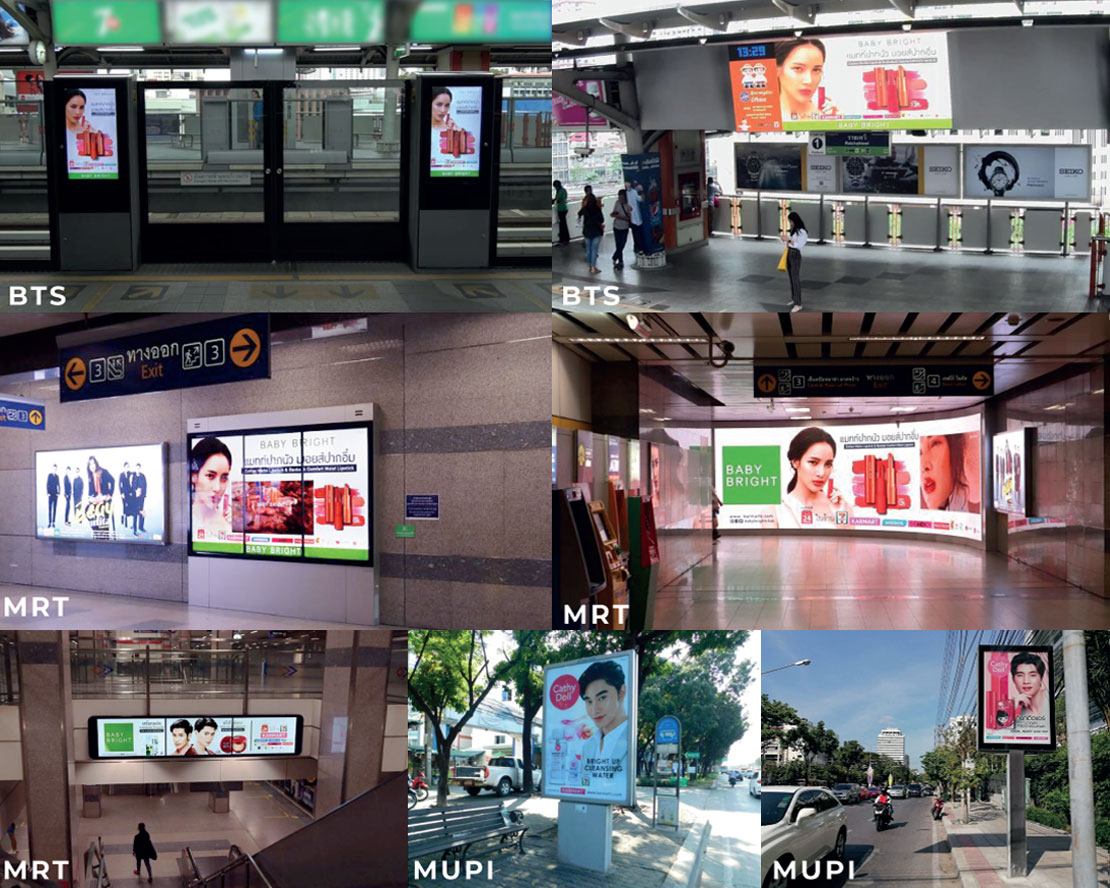 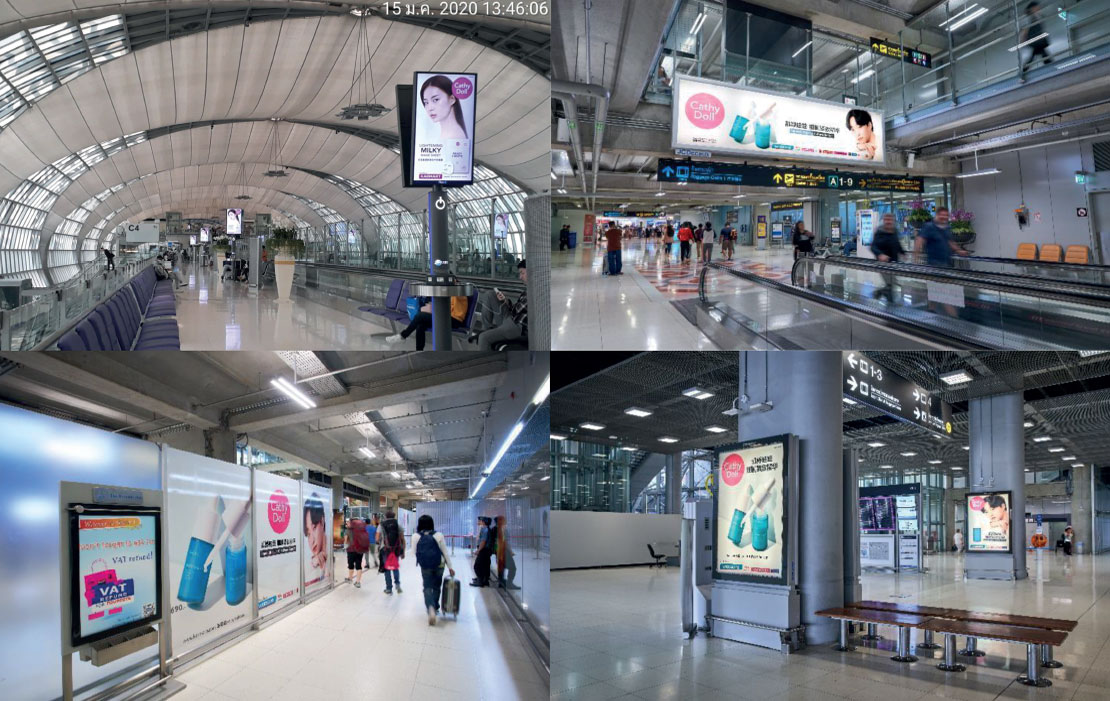 Bus Wrap is one form of mobile advertising media and is the general strategy adopted to utilize various bus routes around Bangkok, including its outskirts and surrounding provinces which are accessible to the mass public as the buses travel across diverse areas, making it an excellent tool for creating brand recognition. 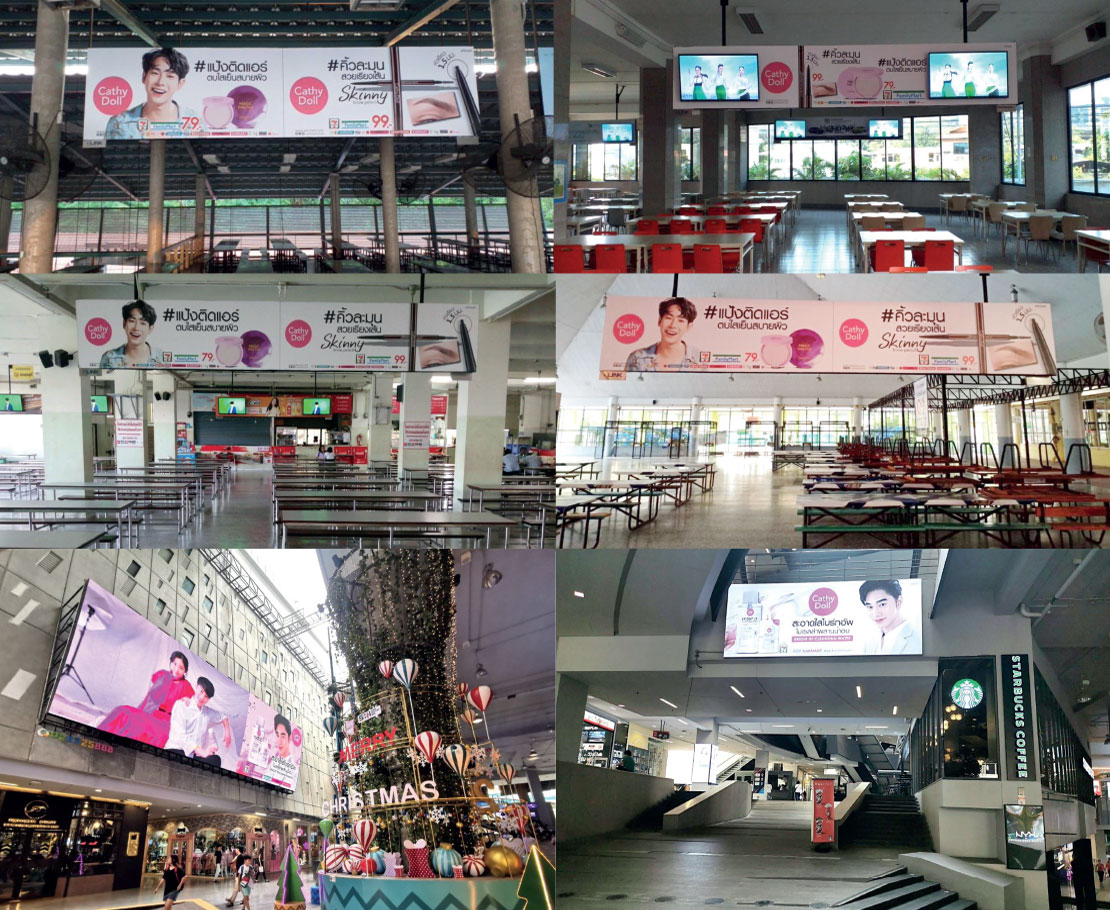 In view of the communication mechanics in modern digital age, online media, of which social media is the main focus, is a key communication channel which cannot be neglected as it is most effective in reaching out to KARMART’s target consumers – the young and modern. Therefore, great focus and substantial resources are dedicated to online media. Starting from year 2018, the Company redirected marketing communication focus onto online platforms and launched a series of chronologically vital online events, including Viral Video Clip, Product Review, Facebook Ad and Instagram and Twitter Post across the following platforms: 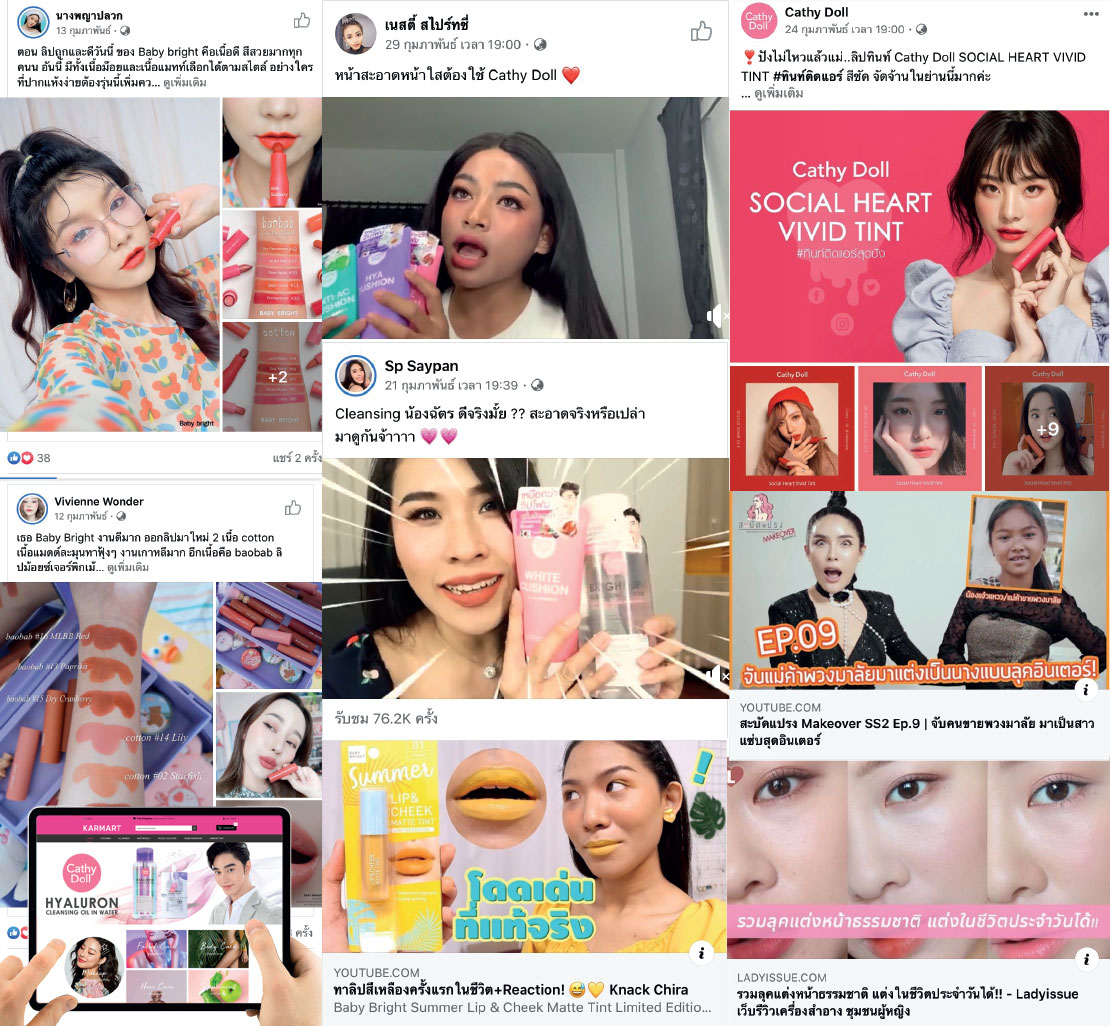 2019 witnessed the showcase of many outstanding milestones of KAMART through events organized with the goal of better reaching out to KARMART supporters and the mass consumers, enhancing brand value and loyalty while boosting sales performance through promotions. 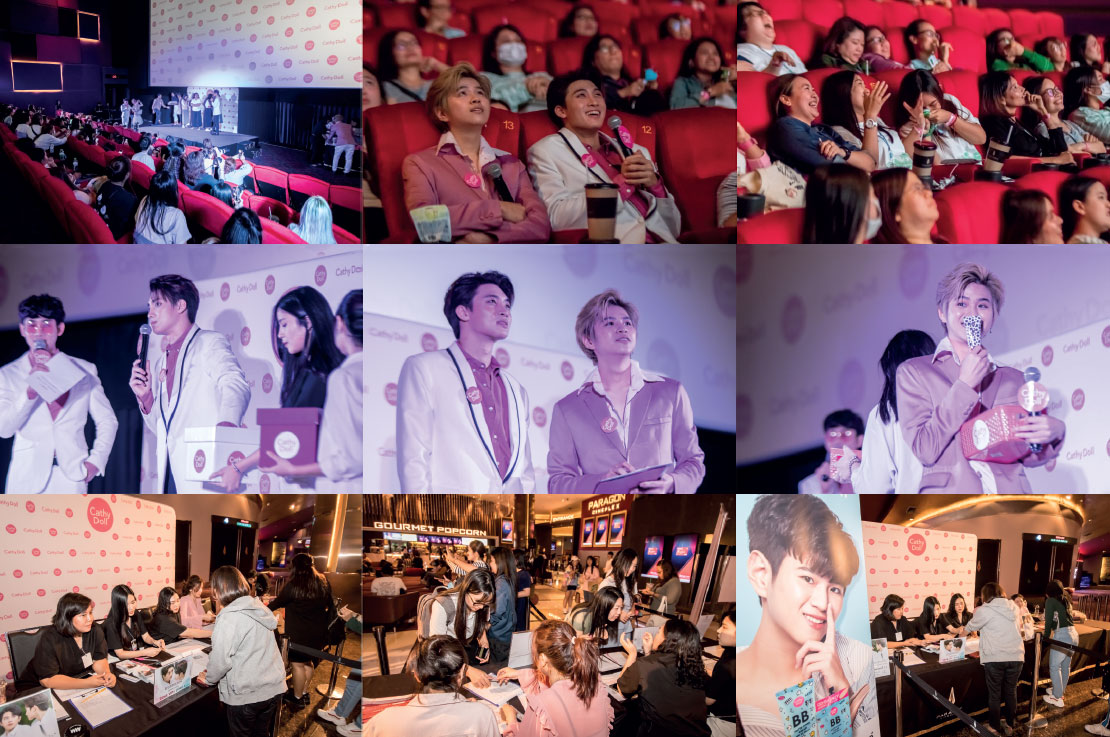 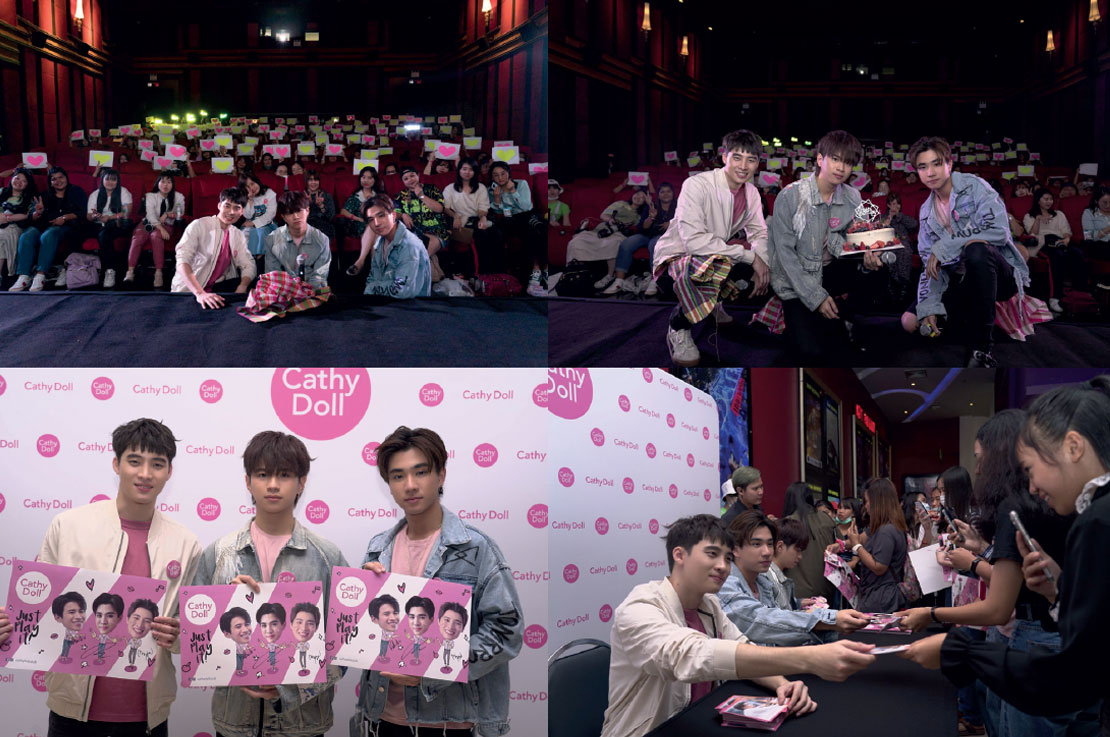 Held on 30 October 2019, 19.00 – 20.00 PM at Grand Hall, G floor, The Mall Bangkhae, KARMART’s leading beauty brand, Cathy Doll, participated in the event in association with GOURMET MARKET and launched exciting sales promotions which featured key focus products. Tonnes of fun and joyful activities were put in place especially for the fans of Perth – Tanapon Sukhumpantanasan who made the event extremely pleasant and wrapped up highlights of the day with fantastic atmosphere throughout the activities.

Viral Video Advertisement Sponsorship for University Students from across the Country

In search of talented and creative marketing ideas as well as enhancing brand preference and loyalty for CATHY DOLL SPEED WHITE CC CREAM, Cathy Doll brand participated in “X Campus Ads Ides Contest 2019” which was organized by Ministry of Digital Economy and Society and Association of Thai ICT Industry as the MAIN SPONSOR and provided 400,000 THB worth of prizes for the purpose of promoting CATHY DOLL SPEED WHITE CC CREAM which was utilized as a main proposition in the creation of viral videos involved in the competition. 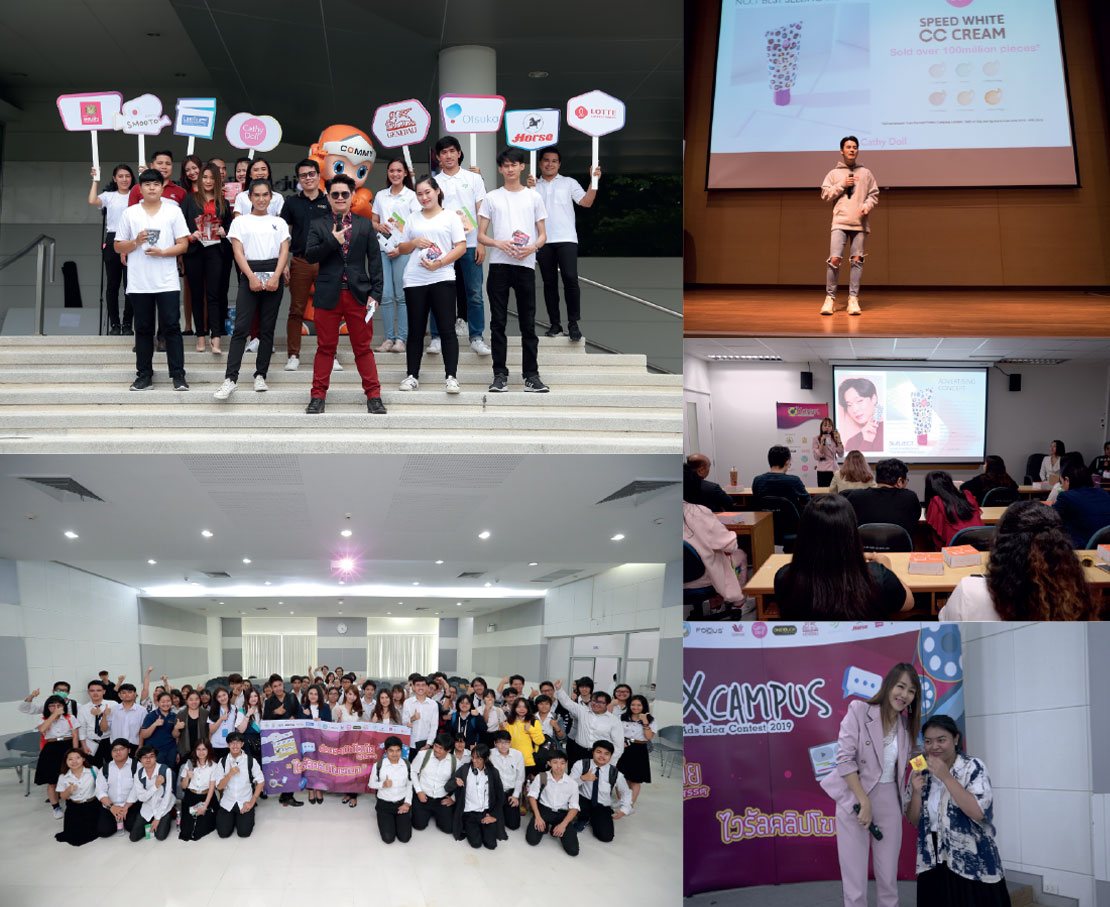 A sponsorship undertaken by Cathy Doll brand, “มันเหนือมาก ตอน ตะลุยนาซ่าส์” which was held at Brandnew Field Good, Chiang Mai, Thailand, on 28 December 2019, 17.00 PM to midnight, is a concert graced by numerous famous artists including Peck – Premmanat Suwannanon, Duo artists: New – Napassorn Phoothornjai and Jiew – Piyanut Suajongproo, Oat – Pramote Pathan, Pop – Pongkool Suebsueng, Aof – Pongsak Rattanaphong and Peck – Palitchoke Ayanaputra. The sponsorship was positioned as a public relation activity in relation to Cathy Doll brand in northern Thailand and also served as an opportunity for entrepreneurs to roll out business ideas and engage their target consumers through sales of Cathy Doll products. In a nutshell, the event mechanics allowed consumers to purchase Cathy Doll products from any channels and submit the receipts issued by POS machine to qualify for a chance to join the concert.

A successful movie event “2Wish Love Intention By Cathy Doll” that featured Cathy Doll’s presenters: Mean – Phiravich Attachitsataporn and Plan – Rathavit Kijworaluk and was held on 13 December 2019, 18.30 – 20.30 PM at Paragon Cineplex, Siam Paragon, which was participated by more than 300 fans of the celebrity.

Another splendid Baby Bright event held in 2019 was a sales promotion and public relation event in collaboration with SR SUPERMART agent store at Phetchabun province and showcasing beautiful and talented actress Mew – Nittha Jirayungurn who represents Baby Bright’s lipstick products. The event took place at SR SUPERMART, Phetchabun branch, on 1 September 2019 and was participated by crowds of lovely fans and target customers. 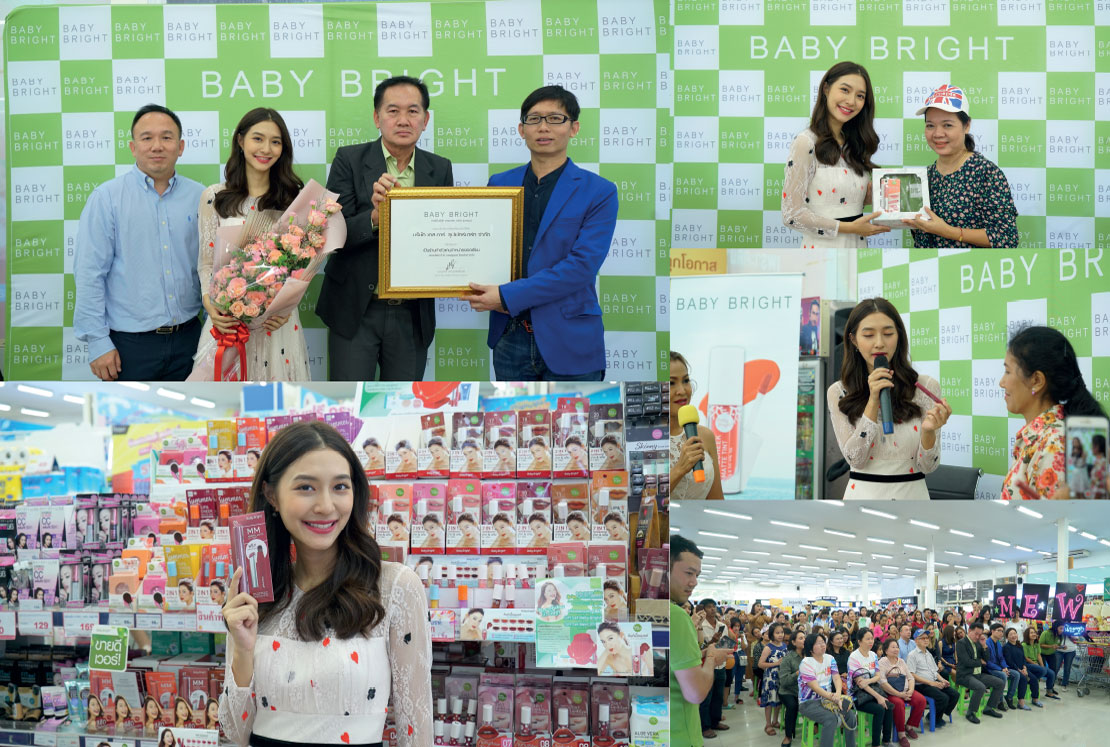 One of the notable events held under Baby Bright brand relates to a sales promotion and public relation event at one of the leading beauty stores named “Hej Street Beauty” in Hej Beauty Festival Market. With special focus on several of Baby Bright’s products, including Aloe Snail AA Smooth Skin Anti-Acne Cream SPF50 PA+++, White Plankton DD Anti-Pollution Daily Defense Cream SPF50 PA+++ and Watermelon & Tomato Matte BB Cream SPF45 PA++, consumers earn the opportunity to participate in the event by simply spending a minimum of 2,000 THB on the selected items. One grand winner was even accorded the privilege of taking an individual picture with Off – Jumpol Adulkittiporn, who represents Baby Bright foundation products, and walked away with exclusive presents from Baby Bright. The event took place at promotion area, 1st floor, CentralFestival Hatyai, on 1 September 2019, and was brimmed with immense love from amazing fans and target customers.

Held jointly with one of the leading beauty stores EVEANDBOY, another successful sales promotion and public relation event focusing on COLOR LIPSTICKS under the brand was held on 16 November 2019 at EVEANDBOY, Siam Square One branch, and received wonderful feedback from the endearing fans and target customers. As always, the brand incorporated multiple joyful activities seeking for lucky winners to participate in exclusive segments with Baby Bright’s presenters: Pat – Napapa Tantrakul and Gun – Atthaphan Phunsawat. 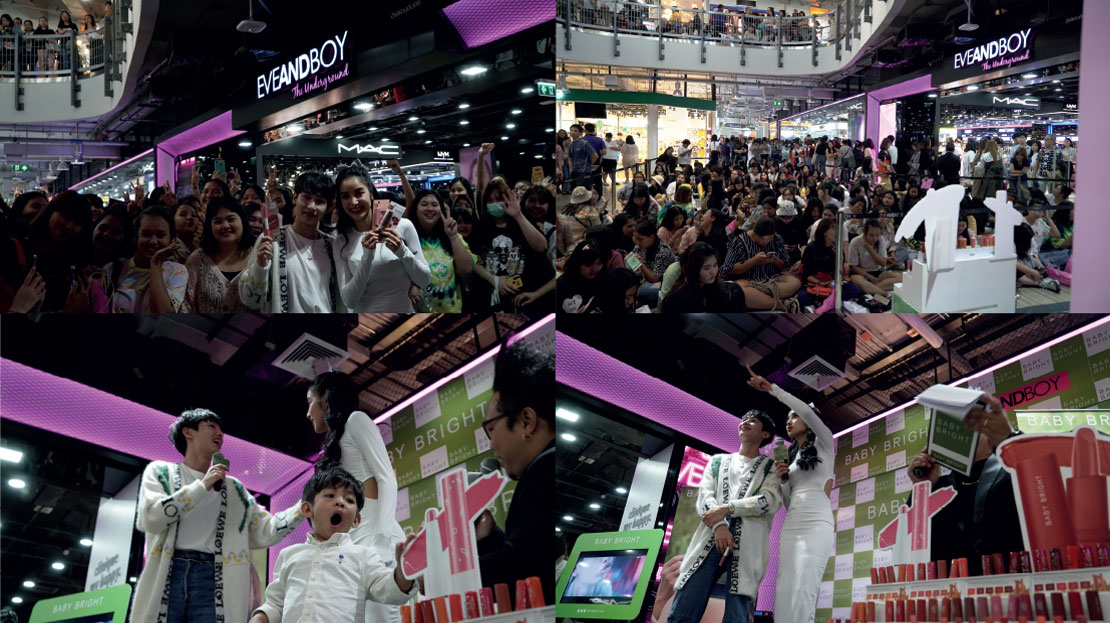 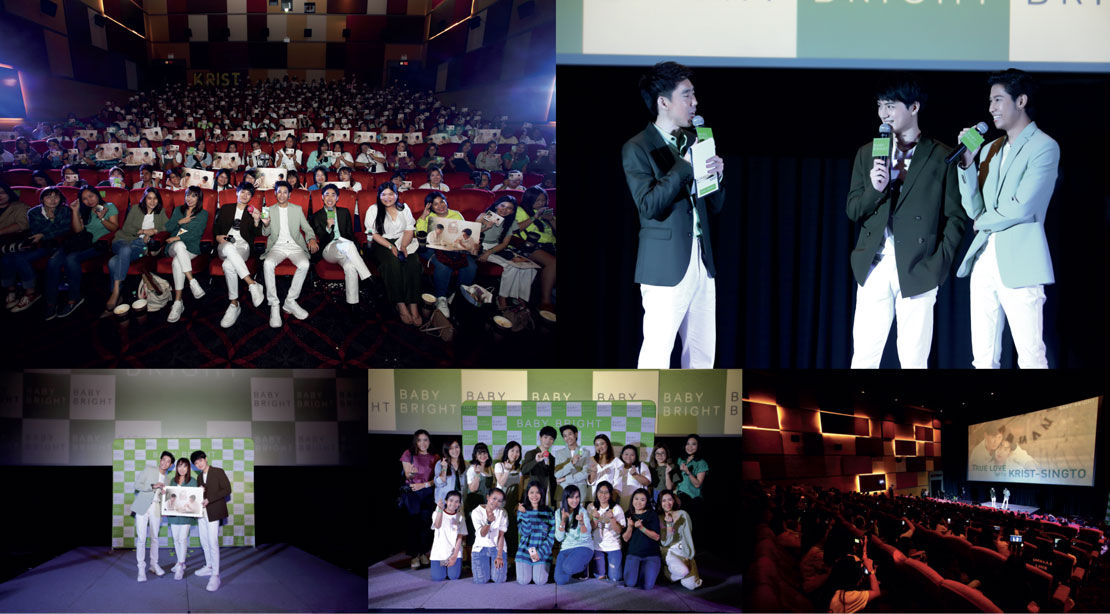 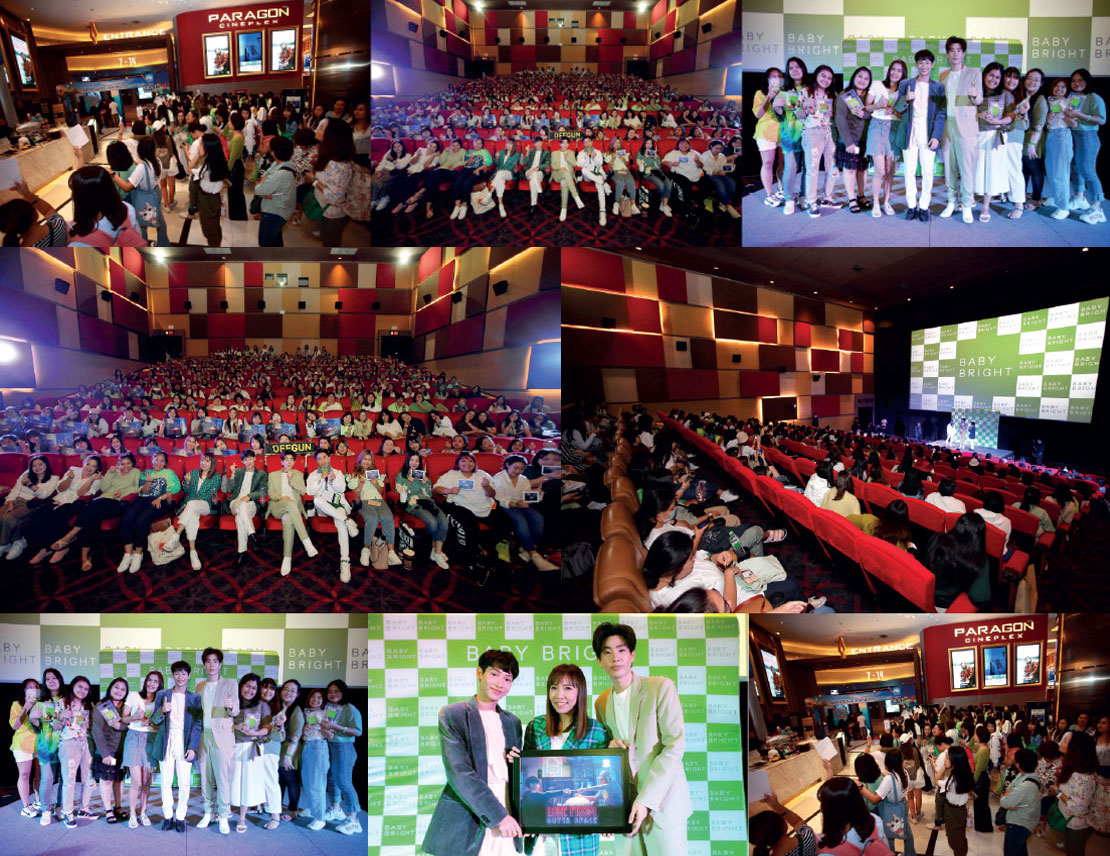 With the health-conscious group of consumers in mind, Karmarts Public Co. Ltd., launched a health promotion activity under Jejuvita with Bas of SBFIVE on 2 November 2019 at 14.00 – 16.00 P.M., at TRIA Medical Wellness Center, RAMA 9. The event was held and participated by more than 50 people who engaged in fun and exciting activities such as exercises as well as fruit and vegetable juice guessing games, all while receiving useful insights regarding product information from brand administrator and instructive details on weight loss from pharmacist.

Back for the second time, this 30-day downsizing challenge marketed under Jejuvita brand zoomed in primarily on weight loss achieved via consumption of Jejuvita B-JIM! The challenge was successfully held for second consecutive year, and participated by more than 50 people.

Hosted by one of Thailand’s leading beauty stores BEAUTRIUM and graced by renowned makeup artist “Hua – Kanniput Sananwong”, this sales promotion and public relation event launched under CRAYON brand was held at Beautrium shop, Center Point, Siam Square, on 1 August 2019. The chance to be the one and only person to receive free makeover from hollyhua was offered to passersby and this prestigious opportunity undoubtedly gave rise to amazing crowds, attention as well as fun and laughter.

Karmarts Public Co. Ltd., participated in MISS THAILAND WORLD 2019 along with SKYNLAB brand, on 3 August 2019 at Palladium Hall, the Berkeley Hotel Pratunam, having in mind how SKYNLAB can bring together a confident smile and fresh breath in the beauty pageant event. The special prize “MISS CONFIDENCE SMILE BY SKYNLAB” was designed for the one contestant who delivered the most beautiful and confident smile that could capture all judges’ attention, and the winner for this award eventually went to “Grace – Chawanluck Unger”.

In line with KARMART’s positioning as an international beauty provider, with significant prominence within Asian, the Asian Beauty Blogger Contest was organized across 12 Asian countries, namely Malaysia, Indonesia, Taiwan, China, Singapore, Thailand, Philippines, Vietnam, Laos, Myanmar, Korea and Cambodia, in search for the best Asian beauty influencer and providing opportunities to amateur and influencers within the region to showcase their true talents through an intense journey. In 2019, the competition went further than expected under a reality show concept titled “BEAUTY DASH ASIA 2019”. The show comprises 5 arousing missions for the countries’ representatives to compete against each other, seeking for the best beauty blogger in Asia, of which the last mission was beautifully wrapped up at ICONSIAM and the grand winner is Mint – Nawinda Bertotti, a representative of Thailand. The proud winner of this contest was not only featured across international online platforms, but also won herself prestigious product sponsorships and collaboration opportunities from KARMART which help promote the brand to an ever-wider range of audience, especially focusing on beauty-conscious market segments. For those who desire to witness this wonderful journey, simply check out all 5 episodes of this reality show on Facebook: Karmartsclub and YouTube: Karmarts Club. 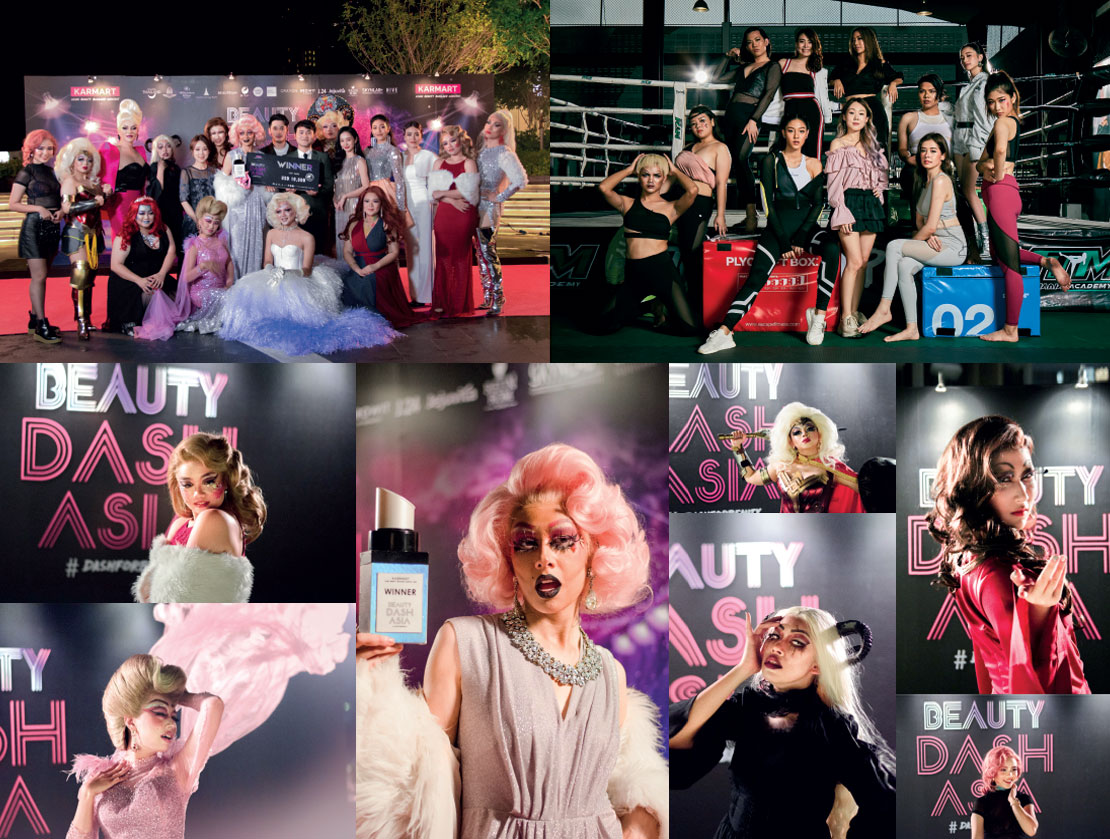